Well some of you may not know but the OPDA / Distributor on the 2005 / 2006 4.0L Motors has a lubrication issue at the top bushing. Because of the drag created due to lack of lubrication it causes the gear to wear which also wears out the gear on the Cam shaft, not a good thing.

I ordered a new OPDA online and will be doing the Grease fitting mod to it. I just pulled the old one out and looked at the gear which was starting to wear, and the shaft was starting to score and get some heat damage.

Ok the first thing to do is pop the cover off the OPDA, Now what you need to do is turn the motor over using a 3/4" socket and ratchet until the alignment holes line up. The picture is with it already removed, but I made sure they were lined up before I pulled it.

Once removed you will see a hole that is plugged, that is where they inject the factory grease, however there is no way for it to get to the shaft, what the hell were they thinking. Now drill a small hole through the plug and insert a sheet metal screw then pull the plug out. Next drill a hole in the housing in a position where you will be able to reach it with a grease gun. Tap the hole out for a grease fitting. Be sure to use some heavy grease on the drill bits and the tap to trap metal bits.

Here is a photo of where I installed the grease fitting.

Ok pump a bunch of grease through it to ensure there is no metal debris in there, it will pump out the hole where you removed the plug.
Next you need to remove the gear, the gear is held on the shaft with a roll pin, be careful not to damage the gear.
Here is my gear which shows the wear.

Now a couple of pictures of the shaft, you can see where it has been dragging and getting some heat damage.

Ok with the shaft removed using a small drill bit, drill through the hole you removed the plug from and drill through the bushing, go slow, be careful, and use heavy grease on the bit. After drilling this hole I made sure there was no debris in the shaft hole and inserted the shaft, then pumped more grease through it and out the plug hole. Next I tapped the plug hole so I could put a bolt in it to plug it back up. Use a really short screw as you dont want to obstruct the grease flow. I then removed the shaft and pumped a little grease in it to make sure it was coming out inside the shaft hole. I then inserted the shaft and applied a little more grease while spinning the shaft. Upon inspection of the shaft it gets a nice coating of grease on it.
Put the gear back on and be careful putting the roll pin back in, install it in the Jeep and no longer worry about tearing up the cam gear !!!

All the photo's are of the old unit as I wanted to give it a test whirl before doing it to a brand new unit out of the box.

I installed the new unit and everything is running Perfect ! No more slight skip and when crawling around in 4 L I no longer get a cyl 2 misfire, so I would say this is a success ! 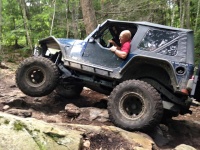 I have never heard of this issue. I have an 05 and need to look into it now. I may have to enlist your help with this one.

I've read a bit about this issue and the zerk solution, but was curious how it actually played out. Thanks for sharing!

At this point I really cant comment, as I installed a new unit with the Mod. I only pump enough grease in it to feel the pressure on the grease gun. After I did the Mod I pulled the shaft out and it had a nice layer of grease on it so I can only assume it will work out well.