I'm a 32 yr old male who like long walks on the beach, a bottle of fine wine, and.... Oh wrong forum! Just bought a 95 yj 4 banger last summer as a toy for when on break from work (funky schedule with long times off at times). Anyway I got a rough country 4 in lift I put on about a week ago and rolling on 33x12.5 general grabbers. So far she dosent seem to be struggling as much as I thought it would! I've wheeled a bit in my old Xterra but she was pretty and I hated scratching it... This beast is rough and I am looking forward to playing in the mud with my two younger boys! 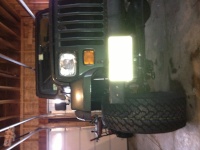 Hi there and Welcome to NSJ, a handful of the members have 4 cylinder YJ's,, you should have no problem wheeling it.
What's your first name?
Mark,

Welcome to NSJ. Glad you found us, and congrats on the new YJ! Hope you'll be able to join us in the spring when we get rolling again. We usually slow down December thru March/April, as the land we wheel on turns over to snowmobile guys during the winter months.

We'll kick off with our annual spring BBQ towards the end of March, but until then feel free to ask questions and make some new Jeep friends!

We are slowly building an army of YJ's, ha ha.

I've got the 4 cyl as well. It definitely needed a regearing when I moved up in tire size for highway, but it does just fine off-road.

Other nice thing about the YJ 4-cyl is it doesn't have the same kind of vulnerable underside as the TJs and 6 cyl YJs. I've beaten and dragged my undercarriage across everything and always drive it home.

We are slowly building an army of YJ's, ha ha.

That we are! World War II was won riding on leaf springs, don't ever let the coil guys forget that.

Name's T.J., and I too have the Low Output 2.5 in my '92 YJ. She wheels just fine, just gotta know when/how much to apply the skinny pedal. Mine is my daily driver that I use for off-trail camping and trips with the club (where slightly modified is run-able). I assume yours is also a five-speed like Geoff (CrawlingForward) and I, otherwise I'd imagine it would be an absolute dog. I'm still surprised, as even my 31" tires have had a noticeable effect on acceleration and mileage (on the stock gearing). Hills hate me even more now, which is really saying something as they didn't like me all that much before.

Speaking of tires, do you have the 'Red Letter' Grabbers on yours or the AT2s (if you don't mind me asking)? I'm running the AT2s and love them, but eventually plan on moving up to something bigger, and the Red Letters are on my radar. Also like Geoff, I'll be re-gearing mine and doing a rear axle swap to a Ford 8.8 this summer in anticipation of those larger meats.

Hope to see you around!

Welcome Adam. Have a seat, grab a beer and look around a bit. Lots to see and do here. 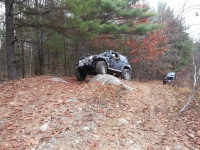