Gonna make my Comanche more of a jeep, door hinges are gonna get cut up tonight, pics will be up later along with the others I promised a few weeks ago. This build is no fun without pics I apologize

I finally got around to uploading all the pictures I have of the Comanche. I hope you guys enjoy them! I started receiving parts today for my lift kit, waiting on a few more parts and I'll be able to get started, still need to head out to a junkyard and get the 4wd wiring harness, but before I do that I need to figure out which one I need, an early year xj harness or a late year harness since the trans and t-case is a 2000. Research will be done soon for that. Had a blast wheeling with you guys Sunday, can't wait to get out there with the manche!

Gonna be starting some work on the manche this week, hopefully I'll have all my parts delivered by tomorrow, anybody want to come lend a hand or help with the SOA rear lift is more than welcome to, unfortunately I'm not 21 so I can't pay you in beer, but your help will be appreciated and remembered for the future

dongalonga wrote:If my rig wasn't being such a bitch the last week I would have helped.  How is it going?

Barely any progress, I realized my front axle that I had bought was from a YJ and so I just got back from picking an axle up off a tj, going to strip it down and start to take my front axle out. I can really ing do a little at a time this week because I need my truck Saturday, next week should be much more progress as I don't need to drive it that week. 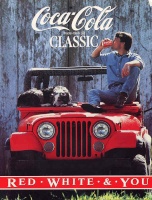 I started to get the front axle stripped, going to try and get some more work done on it tonight and tomorrow, next week will hopefully go much better with working on it since I'll have all necessary parts for the lift, if any of you guys wanna come by next week just let me know I'll be busy working on it, really hoping to get it done for the August club run

*plans got cancelled for Saturday, gonna be working on the Jeep all day*

Well, I couldn't get the control arms off the donor axle I I'm using those ones instead of mine, now I can't call my jeep rust free and can fit in better with the new England crowd

Small update, front lift and axle are in, going to figure out what parts I need for the clutch to work with the new trans then I can get started on that part along with the rear end

thanks, going to be slowing down because the place I got my shocks from gave me four fronts not 2 front and 2 rear,also need to get a new master cylinder and slave cylinder for the 4wd trans since its an external slave. I am really hoping to have this done before the club run, definitely going to need some help with the trans and tcsze if anyone is around when I start that

Okay guys, I got the rear SOA lift in, used a cheap welder for the perches hoping the welds would hold until two days later when I could stick weld it...they didn't hold and the rear driveshaft ripped out of the yoke in the rear, perches came off the axle, ended up getting towed home. Took the measurements for the perches and stick welded them on the next morning, everything was good in the rear. Driveshaft is sticking out quite a bit though from the trans, I was getting some vibes at 45-50 then 60-65 or so but that was bareable. Tonight on my way home from Billerica the vibrations got much worse and were constant no matter the speed, they would let up though once I pressed in the clutch, I am assuming it is due to the driveshaft being too short right now and destroying the bearings inside the trans. With that being said, I'm going to be removing the 2wd trans tomorrow and installing the 4wd trans/tcase which should solve my vibration issues, then I'll get the driveshaft measured up and see how much will have to be cut and get it rebalanced. If anyone wants to come lend a hand tomorrow or Tuesday, feel free to swing by. I'll keep the updates coming at the end of each night. Oh on a good note, I now have a rear tow mount, and picked up some 33" BFG mud terrains along with a full size spare and a CB radio. Front tow hook will go on once I get the trans done. Should be good to go this weekend! I'll get some pics up ASAP, this build is boring without them sorry guys 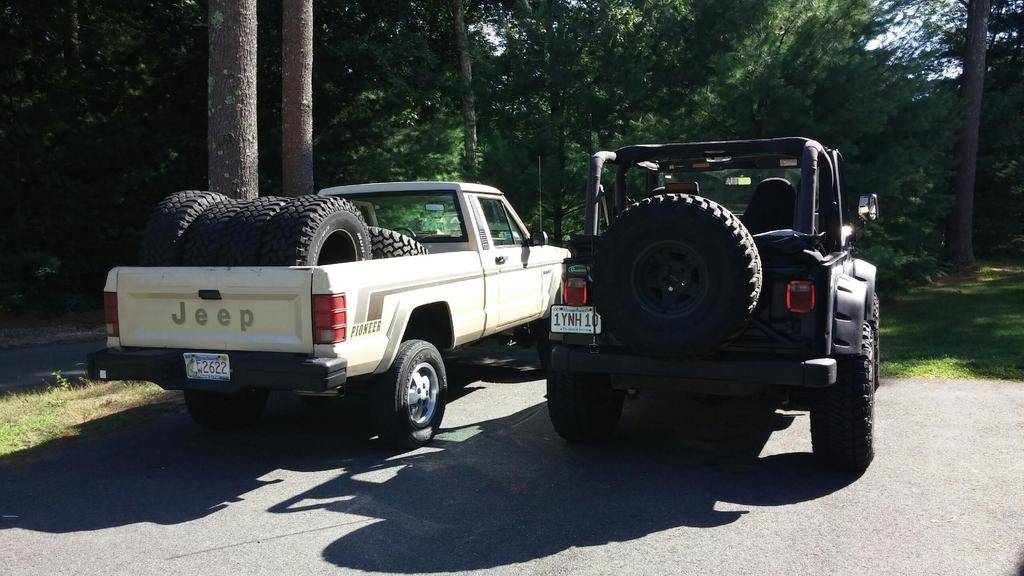 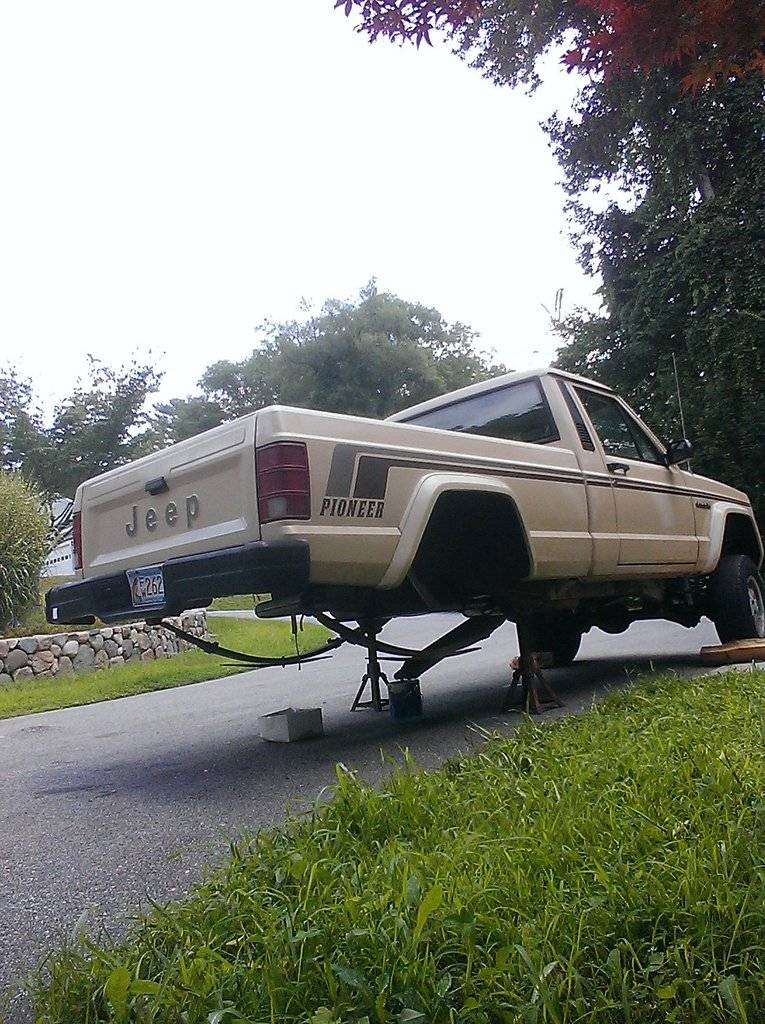 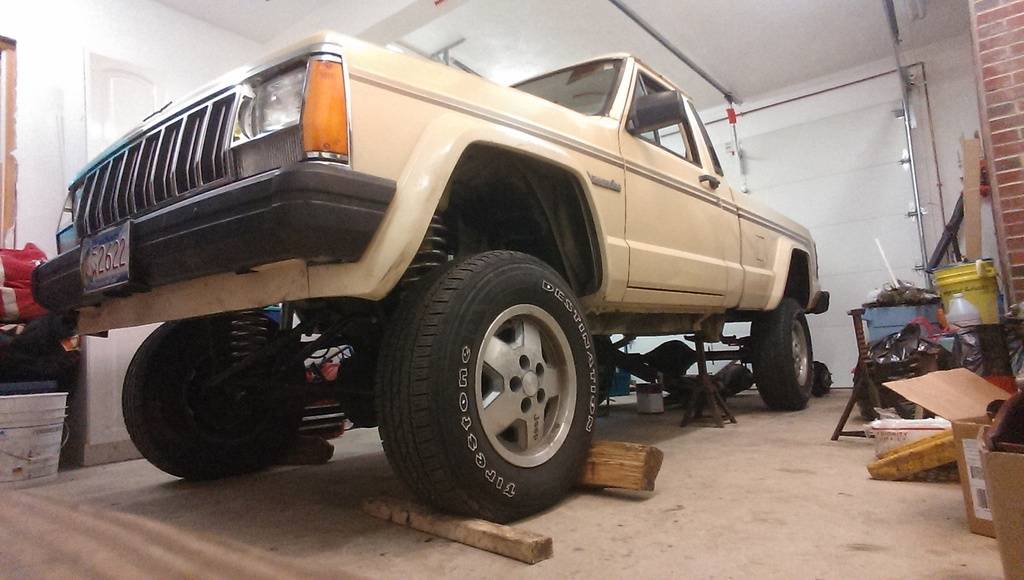 Feel bad I didn't take a min to throw a closer eyeball at this when you came through the other day but hopefully you get to take it to Monadnock this weekend!

Thanks guys, I'm extremely motivated to get this done for the weekend, it's been a while since I've taken my own vehicle on a club run! Updates to come tonight on the trans/tcase progress

Rjcinelli wrote:Thanks guys, I'm extremely motivated to get this done for the weekend, it's been a while since I've taken my own vehicle on a club run! Updates to come tonight on the trans/tcase progress

Okay guys, just realized it's been two weeks since I've updated this. The tranny and tcase are in, I just need to mount the 4wd shift lever/ connect the shift linkage to it, rear driveshaft has been shortened and balanced but the slip yoke I got (because comanche one was incorrect spline count for new tcase) is too short so I need to order a new slip yoke. I could have avoided that issue if I had measured the driveshaft length with that slip yoke but idiotically I based it off of the comanche slip yoke. I got the new master cylinder and slave cylinder in, which had proved to be tough for some reason to find the correct one to fit the tranny and making sure the hose was long enough. I got the 33's mounted on some new rims thanks to my buddy for giving me the rims. I still need to put in my new front axle joints, wire up the CB radio, install rear shocks, and test out the Comanche before MAbell. I'm thinking next weekend as long as everthing is all set if anyone wants to get a mini north shore jeep run in I'll try to set something stock friendly set up.

Picture time, I think I had more carnage the day before Manadnock than anyone who went that weekend, lesson learned: do not drive after installing a 6 inch lift kit when your driveshaft is out too far, yes I deserved what happened to me. 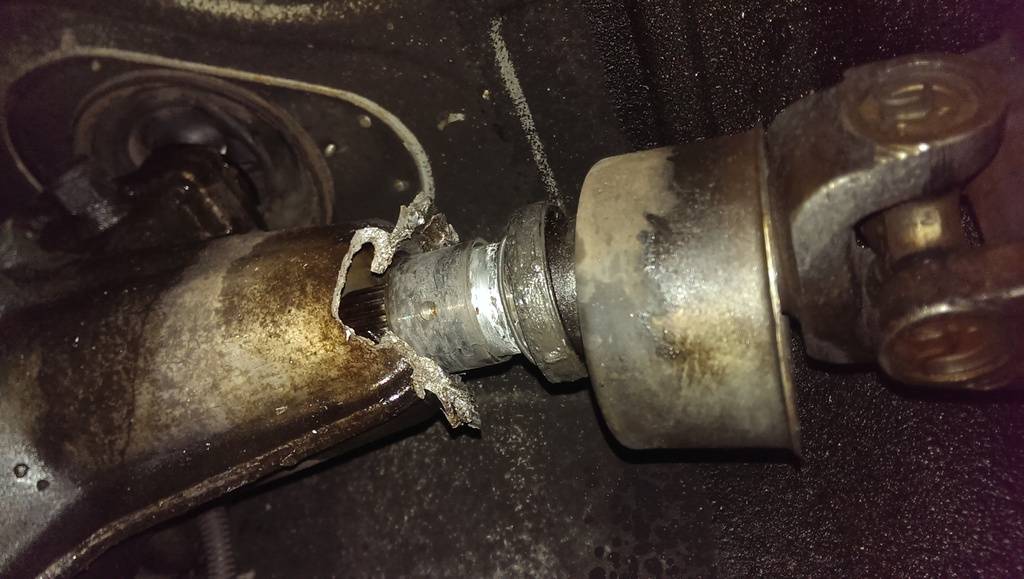 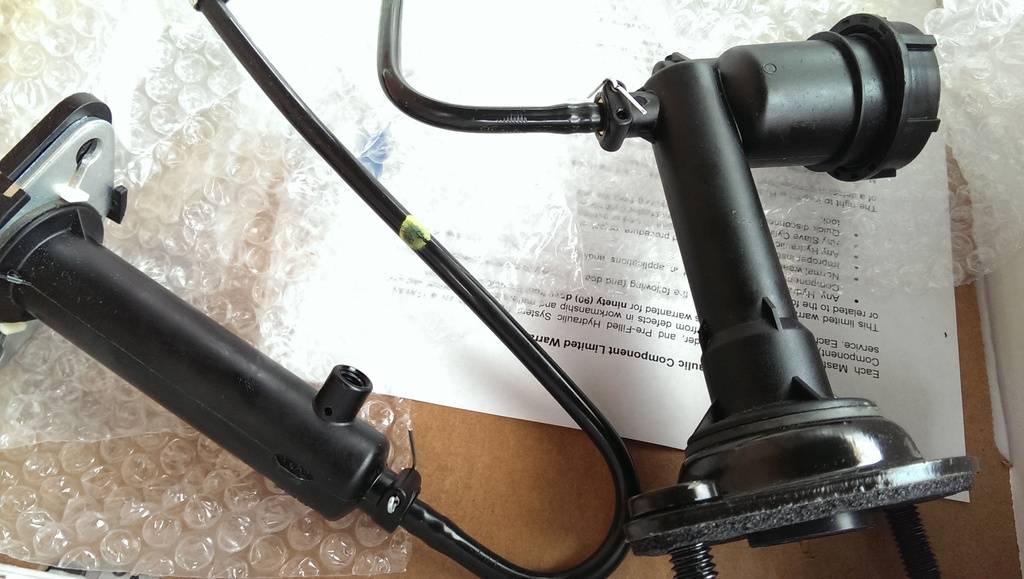 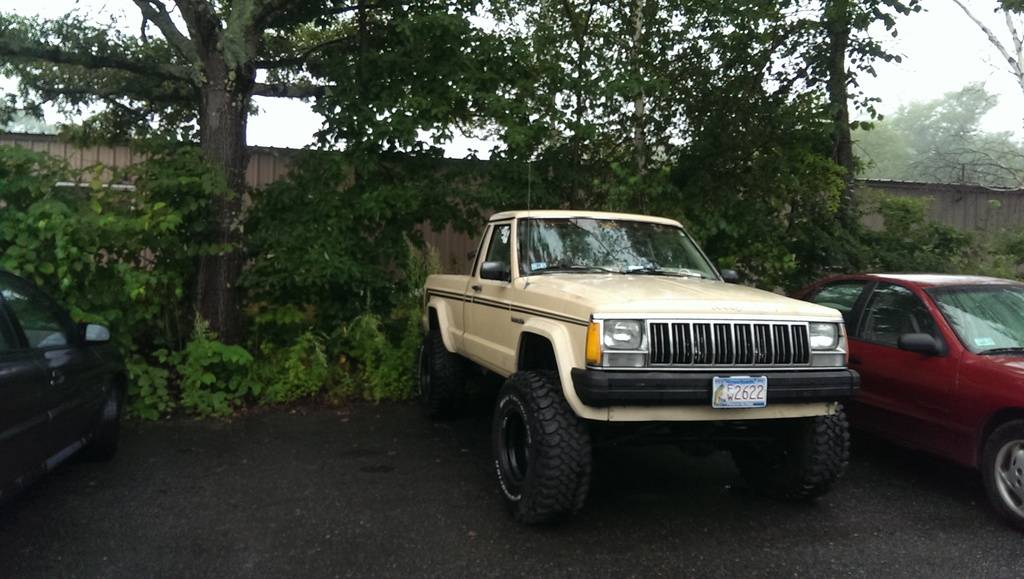 Damn dude! Is that your xfer case housing that's shattered?

That is actually the tail end of the stock tranny before I swapped in the new one, it was quite the ride home that night...

The Comanche survived MAbell, I did dent up my fenders due to tire rubbing and bashed my exhaust pretty good, which ended up resulting in overheating on my ride home from MAbell. So I flushed my coolant, took the exhaust off and am running open headers for now... I need to run a new exhaust asap I can't stand the sound. Going to try and figure out something for the shift linkage, I found a good write-up on one so I may do that. http://www.bsfab.net/?p=26 I'm planning on cutting the front fenders a bit to help with clearance off road, and I'm not looking for a replacement 2.5l for my truck. I have low compression, and oil in my air filter, I was thinking about swapping in a 4.0 but I don't have the time or patience to swap the wire harness over and I can't afford to buy an ax15/ new clutch for the 4.0, so unfortunately I'll be sticking with the nice under powered 2.5, that's it for now

Swapping in a 4.0 is way more work than it's worth. It's not as simple as the internet makes it seem and the costs can really add up quick. A new exhaust will help things in the power department a bit, but low compression and oil blow-by is bad news.

I know I probably sound like a broken record, but if you're DDing it with 4.10s on 33s you really are putting a good amount of strain on a motor/drivetrain combo that wasn't intended to handle that sort of load. Things are only going to get worse for the motor so I would address those issues well before cutting into the fenders.

Assuming the motor in it is the factory 2.5 from '89, trying to find a similar TBI 2.5 replacement (in the case of a swap) is going to be difficult and pricey. And a swap to a newer ('91 or up) MPFI motor would be a decent amount of work because you'd have to update the fuel/intake/emissions systems currently in place to mate with the MPFI setup. If it's got a MPFI 2.5 in it currently though obviously that would be quite a bit easier to do.

Thanks man! I must have been rushing to class and not noticed, if I didn't wave

Page 2 of 5
Permissions in this forum:
You cannot reply to topics in this forum
Latest topics
» Summer Rauche creek trip
by OverlandXJ 2/28/2019, 4:36 pm