the jk is not my first jeep i have owned had a 1997 grand cherokee with a 4.5" iro front long arm lift kit with 31" bfg all terrains painted in rustoleum spray on bedliner and my rear window decal that read Just Empty Every Pocket miss this jeep alot but had to get rid of it still have the lift though.

bought my self a 1998 Grand Cherokee 5.9 limited that i still own and have a few performance mods done to it k&n intake with amsoil filter and prefilter, sct tuner, ported throttle body custom exhaust and remote start, also bi xenon hid projectors by far my favorite mod to any of my jeeps.
before

bought the JK from Kelly Jeepin the beginning of February 2011 with 13k miles on it. its an 07 Jeep Green Sahara 2 door dual tops 4.10 gears from the factory Dana 30 front axle and 44 rear. 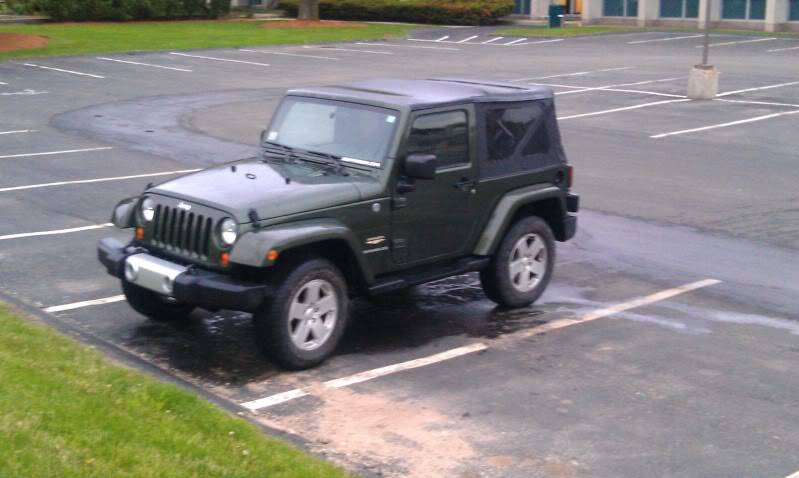 shortly after that the jeep i was backed into ending up having my tail light broken tub dented and rear bumper dented. ended up using this as an excuse to upgrade the tail lights i ended up buy a set of warrior product led tail lights 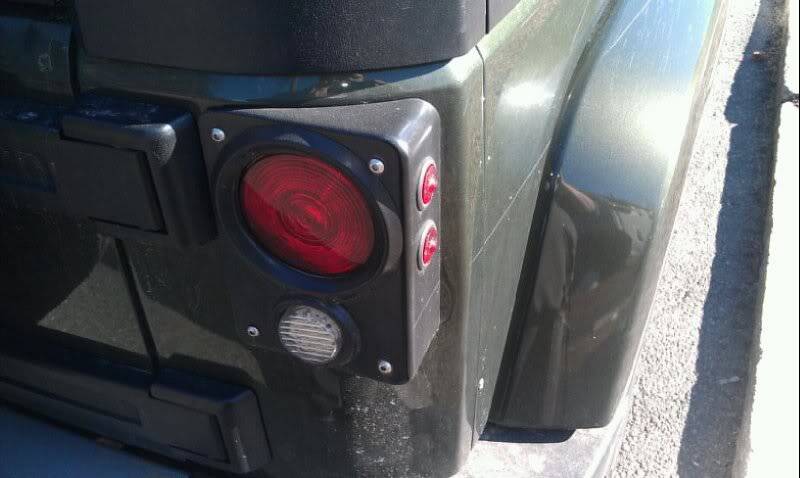 took it wheeling in May 2011 and ended up messing up my steering stabilizer because of the horrible place jeep decided to put it from the factory which caused me to have death wobble at any speed above 55 and made my drive home from the western part of the state a long drive. replaced the stabilizer and also purchased a relocation bracket from jeepswag.com also ended up cracking one of my factory side steps on the same trip but did not care since i planned on replacing them at some point anyway. also cracked the evap canister since jeep had the great idea of putting it under the jeep with no sort of skid plate to protect it. ended up having to replace the canister and purchased a poison spyder custom evap canister skid plate for it to make it so i don't have to worry about it breaking again.
steering stabilizer relocation 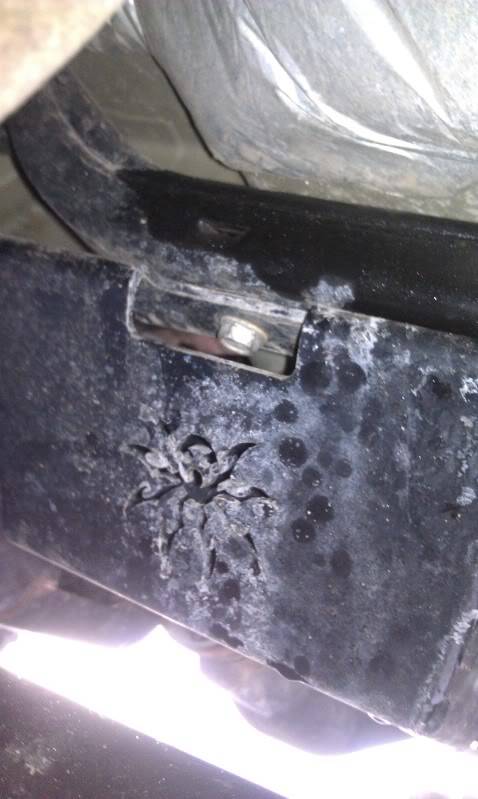 bought a set of Rubicon rock rails off a forum member on jk-forum. 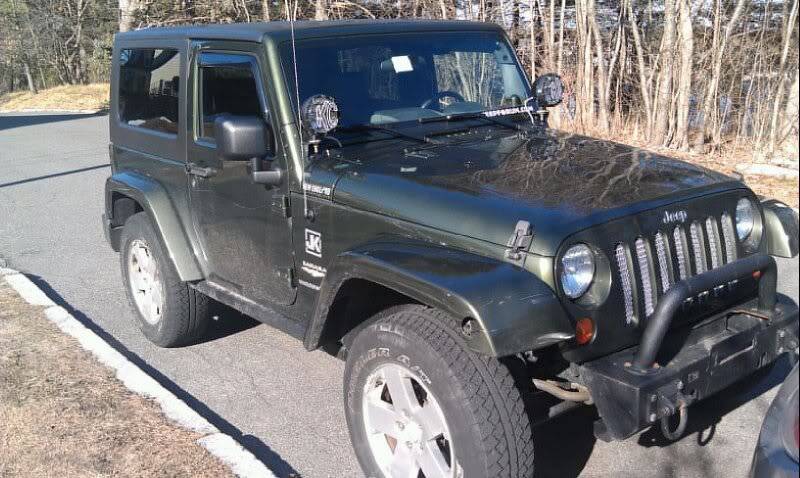 also since the 3.8l doesn't have a lot of power don't get me wrong it is peppy for a v6 but i am also driving a 5.9l V8. purchased a Super chips Flashpaq from a forum member on jk-forum. added an afe cold air intake to the jeep.withe the intake i saw an increase in fuel economy since i did not change the way i drove and i drive the JK responsibly. also purchased a MBRP stainless steel offroad cat back exhaust for the jeep still need to install it

added a set of silver star bulbs to the headlights since the stock JK lights leave much to be desired. also added a set of KC day lighter long range lights to a set of KC windshield brackets with the help of Ryan wired them to a the rugged ridge a pillar switch panel. 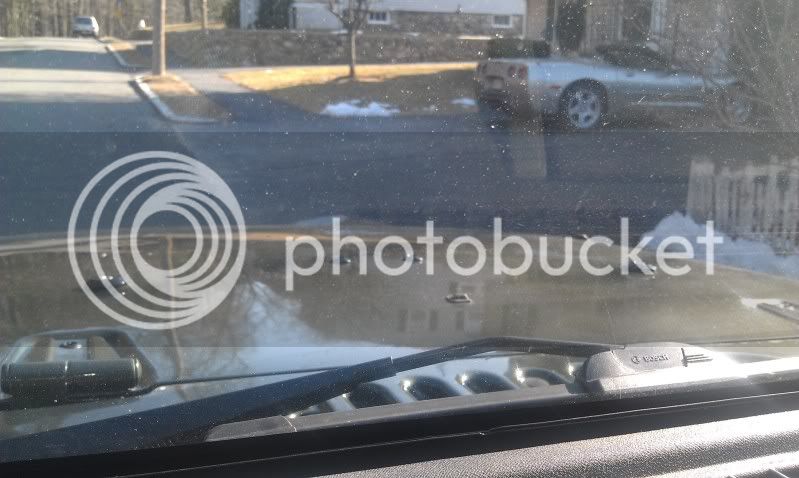 Pics of the lights install on Wayne's JK. Clean install buddy! Glad this worked out well. 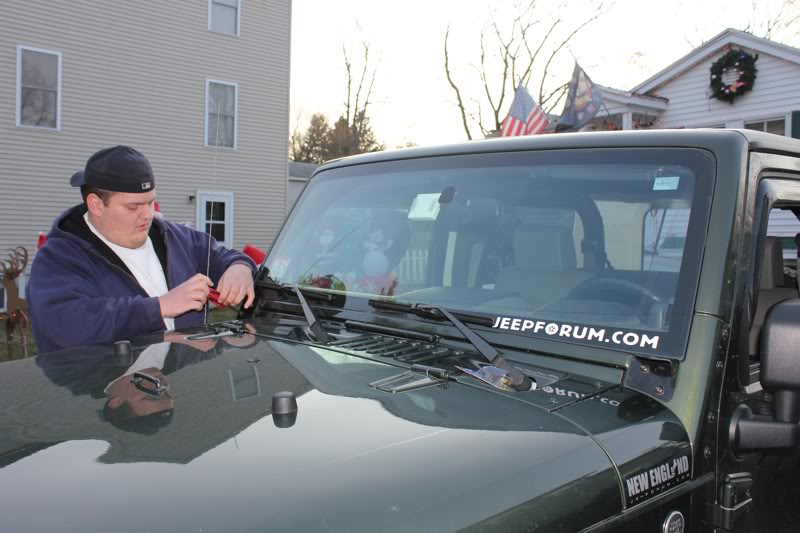 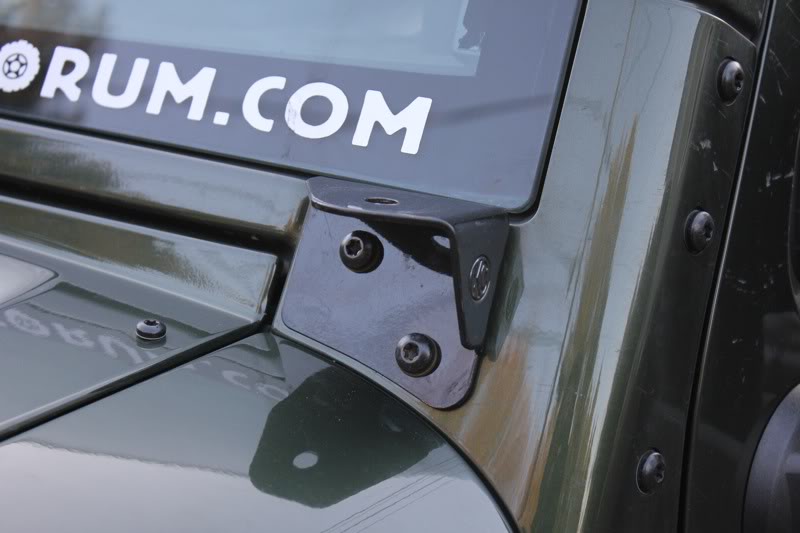 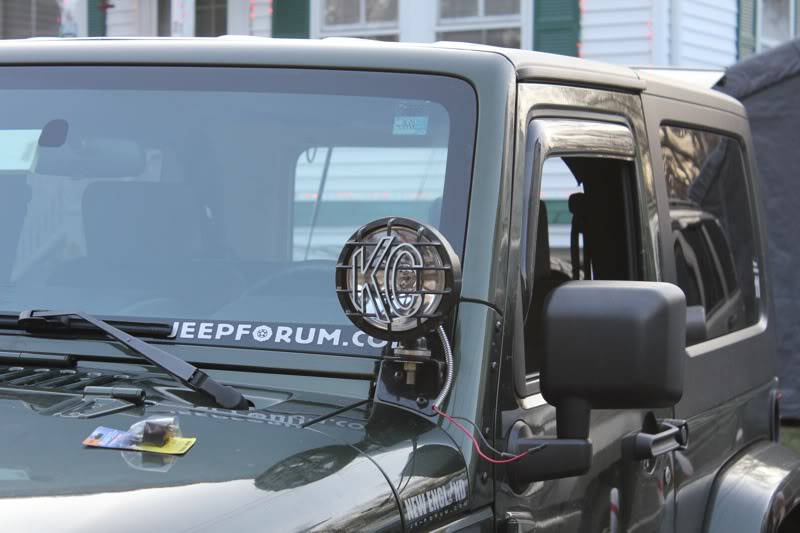 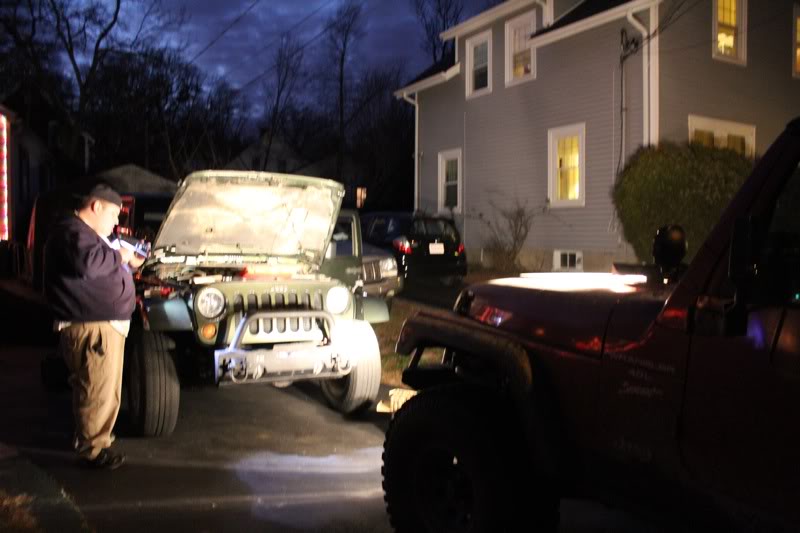 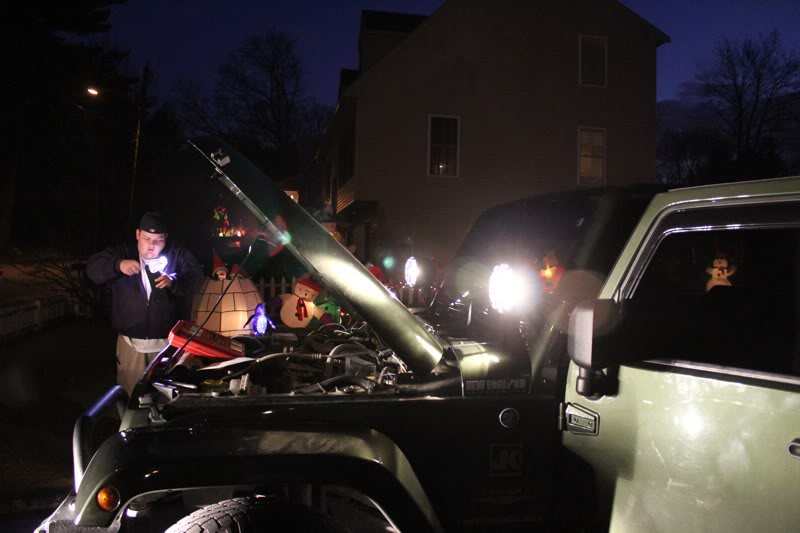 wayne07jk wrote:the lift will so much closer now since i am picking up a set of 35" bfg km2s on 15" soft 8s now need to finish paying off control arms then install

What kind of control arms did you get? That thing's gonna look bad ass on 35s and a lift!

Ryan M wrote:What kind of control arms did you get? That thing's gonna look bad ass on 35s and a lift!

Yeah the stock rubi takeoffs are gone already, sold them back in december.

You going to regear for those 35's?

no staying with the 4.10s i have from factory till i either add a locker or go 37s

update on the jk

yesterday after a busy day go home to just chill out for the night when i get called out side to find out my mother had backed p into my jeep and cracked my passenger side fender and inside liner as well as breaking the turn signal light. so now i am trying to find a new fender but at the same time might just wait for the new stock width tube fenders from ace engineering to be released then get the ace rock rails to match if i do.

How bad is the crack?

Can you just trim it and give yourself flat flares in the meantime?

since the weather the last couple days has been nice decided to do some work on the jk. did an oil change on Thursday. 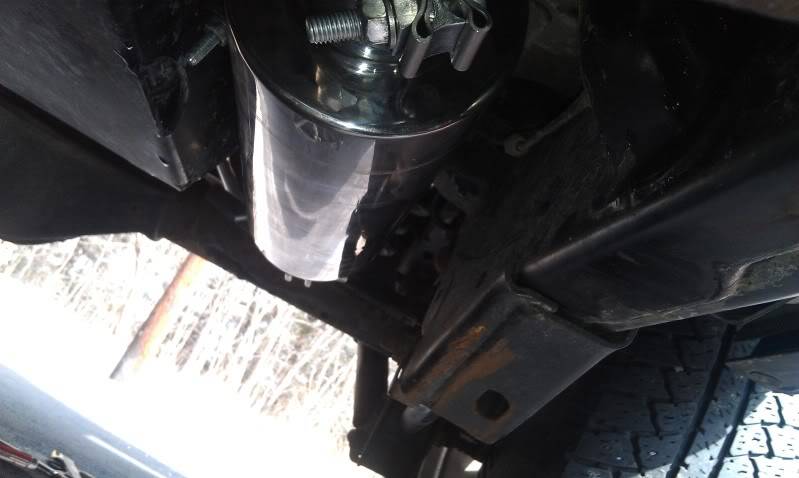 Yup, the whole project only took a couple of hours or so, complete with cutting off the entire exhaust, ha ha.

Much better sound. Throaty without being obnoxious!

And the only photo I got before my camera died. 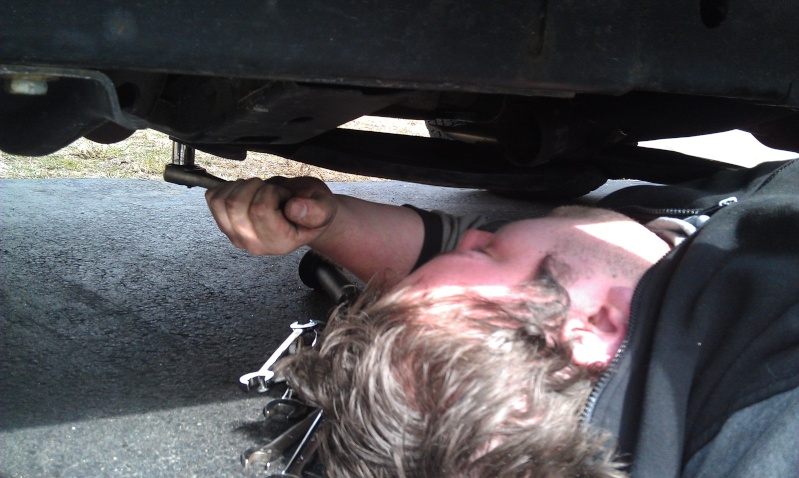 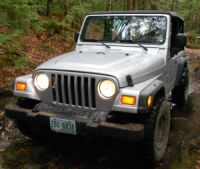 Nice rig! Gotta love when people fast forward your build plans by breaking the Jeep for you.

going to be installing

also be replacing my passenger side front fender flare

That's great. Are you going to be ready for the 21st?

angri wrote:That's great. Are you going to be ready for the 21st?

Can't wait to see the pics. Were you able to find KM2's?

angri wrote:Can't wait to see the pics. Were you able to find KM2's?

i had a used set of 5 but was trying to see if i could get a set of 4 to replace the 4 worn down ones i had.

Page 1 of 3
Permissions in this forum:
You cannot reply to topics in this forum
Latest topics
» Summer Rauche creek trip
by OverlandXJ 2/28/2019, 4:36 pm