My XJ is the permanent home for my fishing kayak. I am thinking about buying a fish finder soon which runs off a 12v marine battery like this:

Electronics are not my strong point. I was curious if I could set up a charging station inside the XJ so I dont have to keep bringing a battery into my small apartment for charging and everything is contained in my jeep. I want it so it is charging whenever I am driving around.

How could I set something like that up? Thoughts? 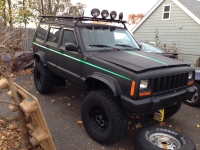 You could do it pos/pos,, neg/neg and if you want you could install a battery cut off switch between batteries. They have the switches at harbor freight, inexpensive.

i figured it would be that simple. thanks

Really? It's that simple?

I mean, I guess when you jump a car you're doing exactly that, but I figured it was only momentary.

My interpretation is if you wire them in parallel you are essentially creating a dual battery setup. Then both batteries would charge until they are full. Correct?

Same as having one battrery.

So if you hooked up++and-- you would end up with 24volts.on all my boats I had 3or 4 battery setup all you need to do is loop the negatives together they charge back up thru the negative and you get more amp hours as well. The switch you are referring to is called a perko switch. Its a safety feature in boats and it is the law to have it installed and working. You can always use the solar trickle charger they work great make a wiring disconnect inside the jeep so when your in it you don't have to deal with it. When your at work or at home just put the panel in the front of the jeep and let it charge all day.

lasemase72 wrote:My interpretation is if you wire them in parallel you are essentially creating a dual battery setup.  Then both batteries would charge until they are full.  Correct?

This is sort of correct, but there's a few more steps involved to make it a "true" dual battery setup. Mark's idea of adding the switch is a good start because because if you just do +/+ -/- your Jeep is now drawing power from both batteries, with no way of regulating the draw. Your device would still be drawing from the Jeep's overall current, not isolated from it, so essentially what you've done is "double" your battery capacity. It might also put extra strain on your alternator to try and charge two batteries at the same time, though I would think it would be nothing major.

The problem with the parallel battery setup is that if one begins to lose a charge (a cell goes bad) it begins to draw from the other battery, and there's no way for you to do anything about this, nor really know it's happening. This means that it is possible to drain down both batteries and leave you stranded. I highly doubt you'd be able to do this with the application you're looking to use the setup with, but that's something to keep in mind. With a true dual battery setup, you can actually give yourself a jump start from the isolated battery to the starter battery. This is not something you can really do with parallel batteries because if one is dead the other will be as well since they draw charge from each other.

Also make sure that you use two of the exact same batteries in parallel so that there aren't any differences between the cells, just to be on the safe side.

Keep us posted on how it goes.

EDIT: Mike is also right about the 24V if it's +/+, which would fry all the electronics on the Jeep.

Thank you guys! Yeah I am not sure which route I am going to go...

Also make sure that you use two of the exact same batteries in parallel so that there aren't any differences between the cells, just to be on the safe side.

The marine battery is significantly smaller than my car battery. I was thinking I would need to build something that regulates the charge. Dewalt makes a 12v cig lighter plug car charger that I could just pull apart and hard wire in... but, it is 100 bucks and I feel like it could be done cheaper.

Yeah, some sort of regulator would be best. I'm no electrical wiz by any means so I can't really offer up much advice on that front. I've tried to familiarize myself with this stuff because I'm considering wiring up a true dual battery setup in my Cherokee to run a power inverter for use on my camping trips.

I started a thread on here about it awhile back: originally the inverter was going in my YJ (and I did in fact install it minus wiring) to work off just a single battery/factory setup but the plan sort of stalled, and once I bought the Cherokee and saw the amount of space for camping gear/people I decided to make it my 'overlanding' vehicle and mount the inverter in it. For now it's just going to be off the single battery/factory setup, but if I can figure out a cheap and effective way to make the dual battery thing work that would be the route to go, especially since killing my battery using the inverter in the middle of the woods would suck big time. A parallel battery might be just as effective for me as well, I just really don't like the thought of somehow forgetting to shut the inverter off or inadvertently draining the batteries down to the point that I couldn't start the thing. Like I said that would be mucho sucko.

Start by using two brand new batteries of the same brand etc. The die hard platinum batteries are a great battery. Even better when they are on sale.