Hey everyone. I've got a funky issue with the defrost on the Cherokee that I'm looking for some help with diagnosing. Here's a rundown.

All of the other HVAC controls work properly as they should on both hot and cold, with the exception of defrost/floor and straight defrost. Here's the situation: when on defrost/floor, it works properly as it should on the floor but almost nothing comes out of the defrost vents on the dash (the window defrost vents work properly though); and when on straight defrost I can hear the defrost working like gangbusters but again only very little comes out of the dash vents, and again the window defrost vents work properly. I can hear the speed of the defrost change when I turn the speed control from low to high, so I know it's not an issue with the air getting through the system, but an issue of where the air is going once it reaches behind the dash.

I haven't run the defrost for all that long yet since owning the thing (combo of knowing something's not right and not needing it yet), but in the short time I have run it it is worth noting that the top of the dash starts to get pretty warm, which to me indicates the air is not be channeled to the right location. I know there could be a number of things causing this, but I'm not sure if it sounds like this is vacuum related, electrical, or just something being out of place in the dash.

Has anyone experienced something similar to this? I've checked vacuum lines under the hood and have not been able to find any cracked lines, and I would think if I had a cracked line that nothing would work at all. I also don't think it's a line because I'd think the window defrost vents would also be affected and not work. It could be that a door somewhere isn't opening, but I'm pretty unfamiliar with this sort of thing so I'm not sure if that would be vacuum or electrical related.

I've done some searching on JeepForum and CherokeeForum and haven't really come up with anyone experiencing this particular issue, so like I said I'm not really sure what to look for or check. Just plain common sense leads me to start by pulling the dash panels and radio out to access the controls and any actuators back there, and I plan on doing that this weekend. In fairness I have not tried running the defrost while having access to this area, so it could be something as simple as a door actuator that's fallen off or broken that I could Jerry-rig back in place.

As always any advice is appreciated.

Possible obstruction in the windshield vents. Check the air ducts. 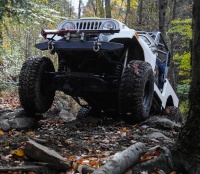 I suppose that's possible. A little more front seat diagnosing has shown that the vent directly in the middle of the windshield kinda sorta works (mostly just at full blast), but the ones to the left and right of it do nothing at all. That may be just a path of least resistance situation though. I'll pop the dash cover off up there again and see if there's anything out of whack, but I didn't notice anything when I had it apart earlier in the summer.

Sticky actuator maybe? The knob that controls the vents has a bunch of small vacuum lines coming off of it, could be an issue with one of those maybe? Or perhaps the switch knob thing has been obstructed somehow? I love that the dash is so easy to get apart in the Cherokee.

I'd say start with checking all the vacuum lines, I did that this past weekend and I found that one of the vacuum lines wasn't even attached to the vacuum pump itself. It now comes out of all the proper vents as it should.

Andrew Miller wrote:I'd say start with checking all the vacuum lines, I did that this past weekend and I found that one of the vacuum lines wasn't even attached to the vacuum pump itself. It now comes out of all the proper vents as it should.

Mine was under the hood/under the jeep. On the TJs the vacuum pump is located underneath on the inside of the passenger fender. The line that was supposed to go into the vacuum pump was actually pressed onto a stud on the bottom of the battery tray on the passenger side. Also, the 90 degree rubber fitting that comes off of the intake manifold is somewhat loose, I want to replace it but I am having trouble finding one.

Gotcha. I can confirm that the line from the canister on the Cherokee is not cracked because I actually had it off while installing the front tow hooks, and it's hooked back up properly (this was happening before unplugging it so I know they're not related). I'm hoping it's something as easy as a line being out of place behind the dash, but I won't know for sure until this weekend.

Luckily like Jake pointed out, taking the dash apart in the Cherokee is pretty straightforward. I believe the door actuators are located near the steering column, so they should be easy enough to access but actually messing with them is another story as I'm pretty sure it's a tight squeeze in there.

So I got a chance to pull the dash apart and check on everything HVAC related, and I sort of have some answers.

Good news: All of the vacuum lines and actuator connections check out and are not broken. That's a decent relief because honestly if I had to replace any of that...I wouldn't. I could barely get a hand up there to check on everything and it's basically a requirement to pull the whole dash.

Sort of bad news: Something is wrong when switching the settings from defrost to floor/defrost. For some reason switching to the floor/defrost setting causes the defrost actuator to move and close the defrost door in the HVAC system, therefore not allowing any air to flow from the vent on the top/center of the dash. But when switching to defrost only the actuator functions and the door in the HVAC system opens correctly and air flows through the top/center dash vent (though not as strong as I think it should).

At this point I'm led to believe that something is wrong with the door in the heater box (not tearing the dash apart to investigate, judge me how you wish) or the control itself may be screwy. Since the door opens and closes properly for every other setting but floor/defrost, I'm going to start by swapping in a different set of controls and see if that changes anything. Now I was supposed to meet up with someone on Craig's List who's parting out a Cherokee earlier today, but he decided not to answer or return my calls so I'm stuck junkyard picking. I'm hoping I can pick a control panel up on the cheap and go from there.

Glad you were able to find out what the issue is! Hope its an easy fix.