Cheesehead on the North Shore

Cheesehead on the North Shore

Hello,
I'm Patrick, originally from Wisconsin, and now living in Lowell. I've lived in the Boston area now for five years. I've talked to a few of you on facebook, but wanted to post a formal intro post on the forum.

My Jeep is a stock 2000 Sahara that's had frame issues that are currently fixed, but I'm not sure if the fixes would hold up to terrain that requires lift.

I am planning on coming to the BBQ and am excited to meet you all.

By the way, I became a Bruins fan the first day I moved here (March 29, 2011). I became a Red Sox fan while still holding some love for the Brewers. I am a half-season ticket holder to the Celtics and watch them way too much. But I am still and will always be a Packers fan. 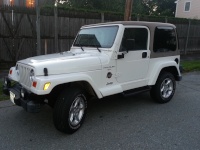 Hello Patrick and welcome to the club.
It doesn't take much to get a little lift under your jeep and there are probably some members that will help you lift it.
See you at bbq.
Mark,

Welcome Patrick. Nice and clean looking sahara, I had similar frame issues on my '01 sahara and had to get rid of it...glad you fixed yours! Hope to see you at the bbq

I also had frame issues with my 97 sahara and by a stroke of luck aquired a 2002 frame that was mint and i swapped it over.
It was alot of work for one person but I got it done.