to seafoam or not to seafoam. what are your thoughts.

Ditto on the smoke show! it does work, your call.

I was full go on it but I received huge backlash from some of my gear buddies.

putting it through the intake and gas.

Great for looking for exhaust leaks

I'd be hesitant to run it through oil on high mileage engines, ya never know what gunk is blocking some leaks from further developing. I've heard good things about putting it in gas tanks as well

Ive used it in the gas tank and dramatically increased my MPG's so i would say use it there.. And i would be carefull of putting it in the oil as mentioned. If you feel the engine is sluggish now with loss of power and tune ups , maintenance has been all done through the years then i would get on the highway and give it hell . My jkur was giving me about 10 mpgs for over 3 tanks of gas so i drove it from boston to lawrence like i stole it WOT just burning gas. Next tank mpgs increased by 5 mpgs. Anyways moral of the story maybe your engine needs some extra lovin if it feels sluggish.

thanks yeah if i get her out of the shop soon, welding shock mounts, i am going to do the dist cap, wires and plugs, then drive her to bangor. burn all carbon. who wants to come get me around portland?

Scarytallman wrote:thanks yeah if i get her out of the shop soon, welding shock mounts, i am going to do the dist cap, wires and plugs, then drive her to bangor. burn all carbon. who wants to come get me around portland?

I'll be heading back from Dexter sometime on Monday afternoon, Ill be on the lookout for any jeeps on the side of the road. 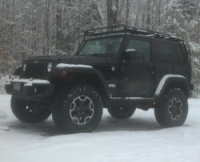 lol well technically I'll be next door in Carmel.

If you hear a lot of swearing from rte 2, swing by.

It's *awesome* for cleaning carbon out of the intake. Every couple years should be sufficient, and make sure you use as directed.

It's good for clearing gunk out of fuel lines and carburetors (I use it for motorcycles a lot) and keeping gas dry and stable. Most likely you won't need it in your Jeep for fuel, but it doesn't hurt.

In terms of the oil, that's the controversial bit. It thins out the oil, meaning you don't want to drive far in it because you have less lubrication, but you can, in fact, run it with Seafoam in the oil. What is does is breaks down the congealed "gunk" oil that might be blocking oil passage ways.

The flip side of that is that it often breaks down the gunk oil that stopping leaks.

So many people assume the Seafoam broke down seals or causes leaks, when the whole truth is that it just exposed leaks that were already there.

If your engine is in good health, I see no reason to put it in the oil. If it's running funny and has lifter ticks and possibly full of gunk, it's definitely worth it, just be aware that it may cause some leaks.

But hey, Jeeps don't leak, they just mark their territory.

And if you ask me, it's easier to top off the oil than replace engine parts due to lack of lubrication...